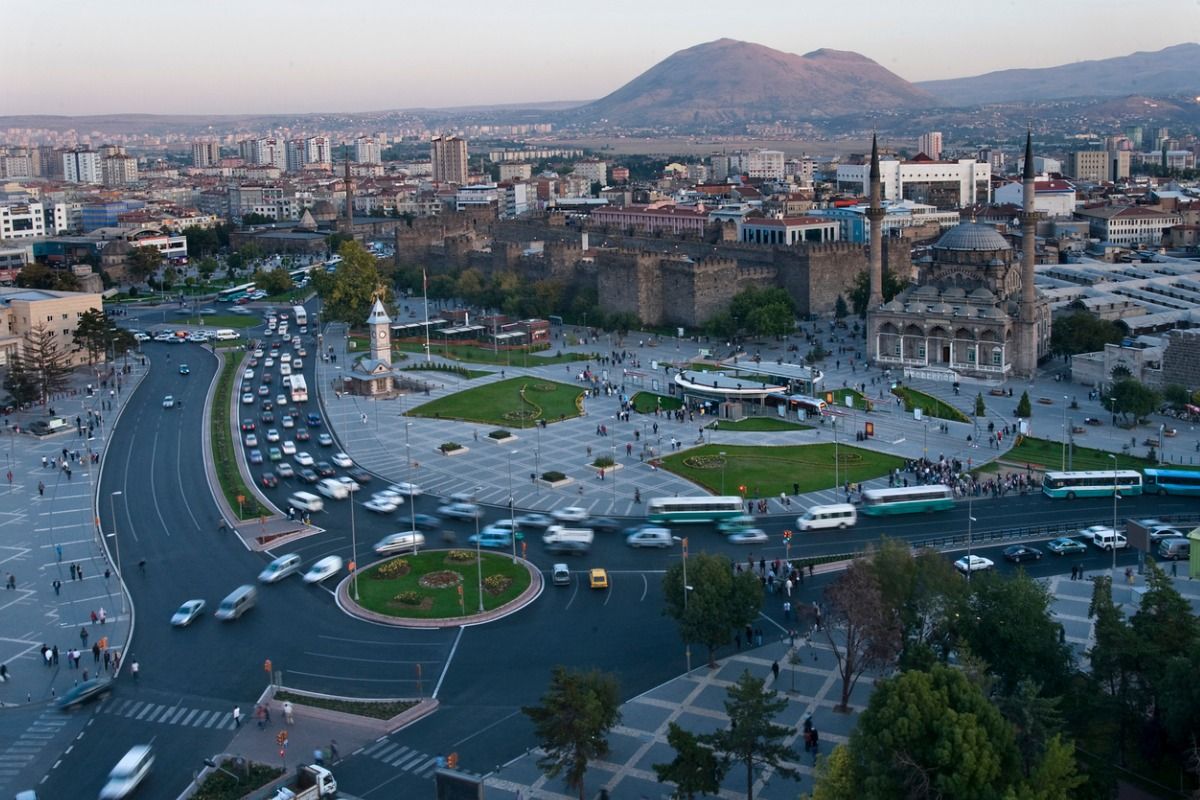 Kayseri Cumhuriyet Square is a good starting point to start exploring the city. When you stand in Republic Square, the heart of the city, and examine your surroundings, you can see the traces of 5 thousand years. From the Roman Castle, you can see the historical legacies of the Byzantine, Seljuk, Ottoman and Republic periods from where you are. Old Kayseri and New Kayseri are intertwined in this square.


Kayseri Castle: the most deciduous of the historical buildings in Kayseri. As far as the 3rd century before Christ history is going. It was used in Byzantine, Seljuk and Ottoman periods. The castle has 2 gates and 18 bastions, and then 1 more door was opened. In general, castles are made on hills and high points, while Kayseri Castle is one of the rare examples set on a flat area. I couldn't travel because it was restored while I was there. It was organized to serve as a cultural and Arts Center.


Kayseri Clock Tower: Sultan II. During Abdulhamid's time, an edict was issued for the construction of a clock tower and muvakkithane (places installed next to mosques and engaged in the work of adjusting prayer hours according to the movements of the sun) in all major cities. Kayseri Clock Tower, which is 10 meters high, was also built of cut stone in 1906 as a result of this edict.


Bürüngüz Mosque: a mosque built by Refik bürüngüz in 1977 in the classical Ottoman architectural style. There is also a point that dominates Republican Square. Mosque 6. built in the century, single dome, single minaret.


Kursunlu mosque: Kayseri is located between the Grand Bazaar and Hilton Kayseri Dec. It is rumored to be one of the two mosques built by Mimar Sinan in Kayseri. There are doubts about the claim as Mimar Sinan was 97 years old at the time. The pencil embroideries and decorations are worth seeing.


Hunat Hatun Mosque and complex
Seljuk Ruler I She was the wife of Alaeddin Keykubat II. Hunat Hatun complex, built by mahperi Hatun, the mother of Gıyaseddin Keyhüsrev, has sections such as a mosque, kümbet, hammam and madrasa.


The complex, built in 1238, is one of the best examples of Seljuk architecture with its stone carvings and imposing appearance. The 800-year-old building was restored and brought to life by the Regional Directorate of foundations when it was facing decay. Inside, there are 22 workshops that perform Turkish-Islamic Arts. The complex can be visited free of charge between 08.30-18.00 hours 7 days a week Dec.


Located in Mimar Sinan park and one of the first Turkish medical centers in Anatolia, Gevher Nesibe Hatun Madrasa and Şifahanesi have an open-top courtyard and four eyvanli architecture. Madrasa II of the Seljuk rulers. Daughter of kılıçarslan, on the will of Gevher Nesibe Sultan, her brother I. It was built by Gıyaseddin Keyhüsrev in 1205-1206.


Today, the madrasa is used as a Museum of Seljuk civilization. The period from the beginning of Turkish history in Anatolia to the fall of the Seljuks was presented interactively using technology. Information about Seljuk architecture, art, science, clothing is presented.


Grand Bazaar and Kazancılar Bazaar
Kayseri means trade. It is the second largest covered bazaar in Turkey after the Istanbul Grand Bazaar. From jewelers to spice shops, from urgancers to clothing shops, there is no Bazaar. Today, there are 500 artisans in Kayseri Grand Bazaar.


Because the segment it addresses is not only Kayseri, but also regional cities, there are customers from neighboring provinces. It is also a place of interest with the Pastırmacılar Bazaar and Kazancılar Bazaar, where jewelers keep their abode. Even if you're not a shopping enthusiast, you can go to breathe the air.


Gön Han, built in 1252, and Vizier Khan Kayseri, built by Ibrahim Pasha, Grand Vizier Nevşehirli, in 1723, are among the places to visit Dec. Again, add the Great Mosque and Fountain, Pamuk Khan and Bedesten to your list of places to see.


Kayseri Atatürk House
It is one of the few classic Kayseri houses that have survived to this day. 19. Imamzade Rashid Agha mansion, built in the century, was built of wood material, covered with cut stones on the outside. Today, the mansion serves as Atatürk's House and Museum. After the Sivas Congress, Atatürk, who came to Kayseri on December 19, 1919, stayed here. 41 works including Atatürk's photographs taken in the city and his declaration published in Kayseri are on display.


Historical Kayseri Quarter
Setenonu, Kayseri traditions and old lifestyle reflected in the attractive region historical Kayseri quarter, restored and brought to tourism is famous for its historical mansions and structures. This old Armenian Quarter, built on 88 acres of land, is a special tourist address where small artisans such as grocery stores, barbers, bakeries are trying to revive. Although it is a little teha for now, I think it will turn into an attractive place over time.


Mimar Sinan House
Mimar Sinan, whose unique talent in architecture exceeds the borders of the country, is one of the most important names raised by the city. Born in the town of Ağırnas in Kayseri and lived here until the age of 22, the House where Sinan was born and raised was turned into a museum and opened to visitors today.

We use cookies to improve the use of our site. You are agreeing to the use of cookies.